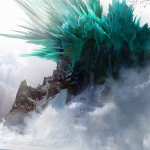 Hey! I'm The Woolly Howl and I'm an admin on this wiki.

A bit about me, I'm a major movie geek who lives in Singapore. I absolutely love watching movies and shows, and my favourites one include: How to Train Your Dragon and its entire franchise (I'm an admin on this wiki too!), Kimi no Na wa, Yuri!!! On Ice, the entire Studio Ghibli collection, Pirates of the Caribbean series, Fast and Furious series and a whole bunch of animated films and anime.

I'm also a native speaker of both English and Chinese, an avid sipper of tea and a proud INTP according to the 16 Personalities Quiz. In addition, I'm a huge science nerd and an aspring marine biologist specializing in conservation and evolutionary biology.

I chanced upon this Wikia and decided to help, as I saw the trailer and found it to be pretty darn adorable. And John Cena's in it, so it pretty much seals the deal. After I was promoted (rather suddenly and unexpectedly, I'd say), I pretty much grew fond of it. There's a certain joy of 'nurturing' a small wiki from ground up and I can't wait to watch the movie.

What I do on Wikia mainly revolves around wiki design, programming and community involvement. You can see most of efforts on the HTTYD Wiki, which I have spent countless hours designing previously. I haven't really done that much on this wiki, mainly because of the lack of members and content. But as the wiki grows, I hope to be able to use the skills and experience to improve the wiki and serve its members!

If you have any questions regarding Ferdinand, the Ferdinand Wiki or simply Wikia itself, feel free ask away on my message wall!

Retrieved from "https://ferdinandmovie.fandom.com/wiki/User:The_Woolly_Howl?oldid=3471"
Community content is available under CC-BY-SA unless otherwise noted.