A statue of Pepe

Pepe is a deleted character in Ferdinand. He was a graceful and brave bull who was loved by the audience in the bullring. Because of how he was loved by the audience, Pepe was granted the greatest honor a fighting bull can get, freedom (also referred to as ”Indulto"). He is called a legend at Casa del Toro, because Pepe was the only bull that had received Indulto, which is why there was a statue of him at the Casa, until it was replaced by a statue of Ferdinand (which was shown during the end credits). 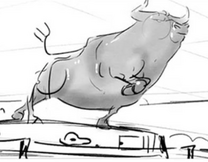 Add a photo to this gallery
Retrieved from "https://ferdinandmovie.fandom.com/wiki/Pepe?oldid=7925"
Community content is available under CC-BY-SA unless otherwise noted.