Carlos Saldana is an Brazilian director, producer and animator attached to Blue Sky Studios. He is the director of Ferdinand.

Saldana explained that he had wanted to create a film that would preserve the original cultural elements of Spain. At the same time, he wanted to expand on the original book yet stay true to Ferdinand's essence of being a kind and lovable bull. He believes that the brevity of the book challenged him as it gave him the inspiration to start and end the film but he ha to figure out the content in the middle. [1]

When he met the family of Munro Leaf, original author, they told him' "If you make a movie, you can have the freedom to expand it, to do whatever you want with it, as long as you keep the essence of the book." He then felt challenged to expand the book into a bigger picture. [3]

Much like many of his films, he uses animal characters. He explains that he enjoys using animals that can project human personalities and make viewers empathize with them. At the same time, viewers tend to be more critical about humans but animals allow more room for emotions and fun. [3]

Saldanha explained that he casted people who believed in the film and message of the story.

He chose John Cena as the voice of Ferdinand as the actor was "warm, endearing and honest" like Ferdinand. [1] At the same time, his intimidating physical appearance but truthful nature resonates with Ferdinand's.

He remarked that Peyton Manning was similar to his character, Guapo, as they both had the confidence. Saldanha tapped into their thoughts, asking telling Manning taht he wanted to cast him "because I keep imagining you in your position, with all you have—the skills, the body, the mindset. Don’t you sometimes have anxiety before you get into a game? I want to tap into that side of you—how did you overcome that?" [1]

Saldanha explained that he tried to portray Spain's atmosphere with richer, earthier color tones. At the same time, he claimed that he felt that he had less of a responsibility to portray Spanish culture as Ferdinand's story is universal. However, he still had to pay careful attention to the details and cultural elements in the film so that viewers feel immersed in its culture. [3] 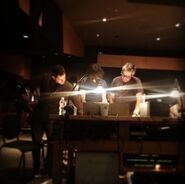 Retrieved from "https://ferdinandmovie.fandom.com/wiki/Carlos_Saldanha?oldid=8060"
Community content is available under CC-BY-SA unless otherwise noted.